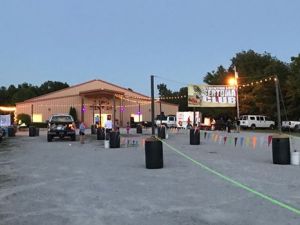 The 2017 Dam Glow Run was a tremendous success! For the first time, our committee agreed to devote all proceeds of the Dam Run to High School Seniors in the form of a $1000 scholarship. With proceeds from the 2016 Dam Run and a profit match from the Black Walnut Festival committee we were able to award TWO $1000 scholarships this year to Stockton High School Seniors Maggie Fischer and Sierra Kenney.

At the conclusion of the 2017 Dam Glow Run, the committee is proud to announce we had over 150 runners cross the finish line that don their very own Dam Glow Run 5k Finisher’s Medal compliments of the Stockton Lake Sertoma Club! Proceeds alone exceeded $2200! It is the committee’s hope that the Black Walnut Festival Committee will graciously match these proceeds once again, making it possible to award multiple high school scholarships; potentially across the county! 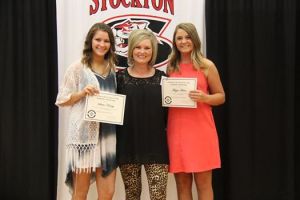 After the completion of the run, finishers and spectators alike were provided an opportunity to stick around and partake in various yard games, take Glow-In-The-Dark photos with their friends, purchase ice cream from the Scoops Ice Cream trailer and support the Stockton High School FBLA Chapter by visiting their concession stand!

Although the race was not officially chip-timed, there was a running clock that allowed finishers to challenge their own Personal Records.
1st Finisher in the Male Division was 15 year old Jordan Albrecht with a time of 23 minutes and 40 seconds. Albrecht was followed by Zach Haines at 24:56 and Walker Harrison with a 26:13. 1st Finisher in the Female Division was Rachel Schuck with a time of 27:00. Shuck was followed by a 2nd and 3rd place tie between Brooke Beaty and Alyssa Farran.